I found this site that has 50 ways to fix/get rid of things like smells. Just throwing that example out there. Anywho, here are some in case you’re too lazy or not curious enough to visit the site yourself. Silly dogs.

Time to go use some home remedies!

11. Burned a pot of rice? Just place a piece of white bread on top of the rice for 5-10 minutes to draw out the burned flavor. Be careful not to scrape the burned pieces off of the bottom of the pan when serving the rice.

13. If you arenâ€™t sure how fresh your eggs are, place them in about four inches of water. Eggs that stay on the bottom are fresh. If only one end tips up, the egg is less fresh and should be used soon. If it floats, itâ€™s past the fresh stage.

16. Donâ€™t store your bananas in a bunch or in a fruit bowl with other fruits. Separate your bananas and place each in a different location. Bananas release gases which cause fruits (including other bananas) to ripen quickly. Separating them will keep them fresh longer.

37. If your loaf of bread is starting to go stale, just put a piece of fresh celery in the bag and close it back up. For some reason, this restores a fresh taste and texture to the bread.

49. A cotton ball soaked in white vinegar and applied to a fresh bruise will reduce the darkness of the bruise and help it disappear sooner.

This is a stunning video that plays with typography. It’s all in Helvetica… so so cool.

Flickermood 2.0 from Sebastian Lange on Vimeo.

Mummy found this little guy under a tree in the front yard when they were trimming. How cool is he?! With his little green eyelids and everything… Surprise Surprise, I knit Jessie a scarf for her birthday! Yes, it IS almost spring, but I hear scarves are in style with young people these days. The yarn I used wound up turning my hands and my knitting needles blue… hopefully I soaked out all the extra dye so it doesn’t turn anything else blue.. heehee, as funny as it would be to have a blue neck. Happy birthday Jessie!

p.s. the pattern is the Morning Surf Scarf

Mom, Dad and I went up to Skibowl on Thursday morning. It was absolutely gorgeous. There was no one there, everything was nice and groomed and it was so sunny! I hadn’t been skiing in a couple of years so it was nice to start again on a good day. I only fell down twice which I think is pretty good for not having done it in so long. Oh so perfect. I like skibowl.Plus, in the summer they open up the Alpine slide at Skibowl which is a concrete thing that you rocket down on a little sled.

I discovered this game a few days ago when Star was here and it’s been on in the background since then. I’ve got ten minutes, sure I’ll eliminate a few of those cute buggers… and maybe explode some dynamite or use one of those mushrooms. I haven’t played it with the sound on so it’s up to you to discover if there’s sound and if it makes it any better.

The magical Strizzle paid me a visit. It’s like a visit from the Tooth Fairy, Easter Bunny or Santa, but better. We baked, got Chinese food, went to Goodwill and then gave Monty another bath (he was easily as pleased this time as he was the first time). It was a good 24 hours. 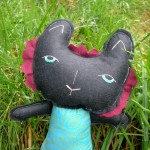 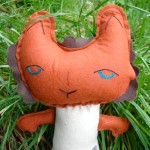 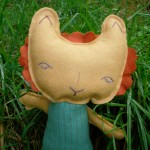 There are lions in the etsy shop! Woot! Go check ’em out… or be square, suckas.

This has always been my all time favorite music video. Everything about it makes me happy from the fox mask down to the mossy rocks. Sigur Ros’ Glosoli: