Judging by the pictures of Major Matt Mason – Moon Mission over at Doe-c-Doe, this book looks EXCELLENT! Thank you 1968… 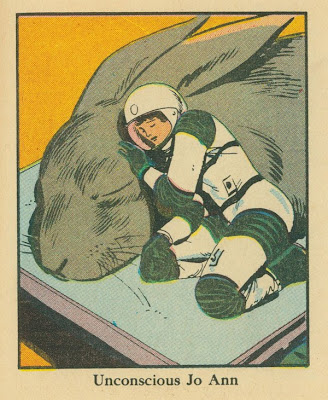 The New York Times reported today that it is now officially legal to keep bees in New York City! Congratulations New York! In honor of this new development I’m posting some amazing little bee accessories I found over at Hen and Hammock. These are for solitary bees (not bee hives, but mason bees and such)… excellent!

This is along the same lines as this mason bee house I posted about a while ago. The little tubes are the perfect homes for these non-aggressive, busy pollinators. Plus this looks like it would be super easy to make on your own.

This house provides homes for ladybirds and solitary bees, two insects that are essential for any garden (Lady birds are the same insect as Lady bugs). That way you can provide breeding areas for aphid eaters and pollinators all in one!

While you’re at it, you might as well try to save that dwindling hedgehog population too! They sell this sweet little house and I couldn’t NOT post it. Not that there are any hedgehogs around these here parts.

I finished a cardigan I’ve been working on (for what seems like a small eternity)! Oh it feels so good to call something “done”. But it’s not done, not really. I might still get an urge to embroidery more bits of this and that… and I might put some buttons on, just for show. But for now, I’m satisfied. The pattern is for a Featherweight Cardigan by knitbot. It was a pretty great pattern, you knit the cardigan from the top downwards, which is unusual. I used the same yarn I made my last pair of fingerless mittens out of (Knitpicks’ Palette). I’d never embroidered anything on something I’d knit before and it was surprisingly easy. I think it helped that the stitches are so small and even. Perfect! A few days ago, I posted the results of some hard work involving soap, wool and a spinning wheel. Now it’s time to look at the same wool once it’s met some knitting needles! I took the yarn I spun and knit Joe one half a pair of socks. One sock took an entire spool of yarn… that’s a really big foot. They are most definitely the largest socks I’ve ever knit… and a big contrast to the tiny baby shoes I’ve been knitting. I hand carded and spun the wool so I would have sections of dark, medium and light colored wool. Joe took wool from the same fleece and ran it through a drum carder which blended all of the different fibers together. This made an evenly medium grey batch of wool roving without the variation that I like so much. It was a much faster process though…

Now it’s time to get down with that second sock!

Vice Magazine just released their Fashion Issue which has a great collection of in-depth, interesting articles on various fashions. Enjoy these little glimpses into other people’s clothes and habits…

Dressed to Kill (or be Killed) – the costumes of bullfighters I wish I’d seen this when I was little!

I’ve read The Mind of the Raven by Bernd Heinrich a few times. Each time I’m surprised at how smart ravens are. They are smart as far as their life in the wild demands. Crows, however, are people-smart. They live where we live off of what we do/produce/throw away. They are found everywhere in the world expect the arctic and are wildly successful. Here’s a video that shows just how smart these birds are and why it’s important to look at them without thinking about getting rid of them.

Less than a week ago I went to Bonnieview with some folks to shear sheep. Since then I’ve been steadily working my way through two rather large garbage bags of wool. I have three kinds/colors of fleece: a dark, dark brown that spins up black as night, a marbled fleece which spins up either grey or with stripes of color (depending upon how you card it), and a very very white fleece. I’ve processed half of the deep, dark brown and most of the marbled fleece. Now I’m out of soap to wash it with so I thought I’d take a break from the sink and the spinning wheel to show you some pictures. This is a picture of the same fleece in three different stages. On the left is the fleece as it is straight off of the sheep. It’s chunky, full of lanolin and has bits of hay and other less desirable things in it. In the middle is the same wool from that fleece after it has been washed, dried and carded. It’s much fluffier and almost free of debris. On the far right is wool from the same fleece that has been spun. I wanted a variety of colors to come through in the final yarn, so I purposely separated the various shades in the original fleece for the greatest contrast. This will be a single-ply yarn (which means that I won’t be twisting two pieces of yarn together to make a sturdier, thicker version) and I’m going to try to knit some socks out of it. Try is the operative word here. Raw wool, straight from the sheep. In honor of the 2010 Winter Paralympics which starts tomorrow… good luck Tyler!

I was skimming through my google reader when I notice this little tid bit:

My, that sounds like…. me! I clicked on it and found myself eye to eye with one of my Manimal tins! Thank you Mr. X Stitch for featuring the shop and blog today! I have a mutual love for all of the things on your site too.