I unearthed this video today, and it made me smile… The bunnies are loose in the apartment… First, I want you to revel in all of Linus’ glory… and then you should notice all the FUR in the air. It’s that time of year, time for a shave this weekend. For a special sister who has turned another year older. Happy Birthday! And a handwoven infinity scarf in just the right shade of coral/conch/peach. I’ve had a special request for a cat sling (aka baby sling) for carrying cats to and from their romps in the great outdoors. Our test subject? Sir Linus. He looks quite satisfied with the dinosaur-themed sling action. It was a glorious day today (I was only wearing ONE sweater!) so the buns and I went on an adventure to the park.Â I have a list of things I’d like to try around food, crafting, exercise and all sorts of other bits over the coming months.

I spend forty hours a week sitting on an exercise ball at my desk and about that much additional time knitting, reading or doing some other seat-based activity which means that I spend very few hours moving or standing, let alone exercising. I joined the Green Microgym on Belmont a few months ago and have been steadily clocking in hours on the cardiovascular equipment. Most of their cardio machines generate electricity and tie back into the electrical grid. So, every step I take generates a bit of power to keep the lights on, the music playing and helps off-set the other machines that use power rather than generate it. All this helps get me up and out but I have a ways to go before I’m exercising enough just to keep my circulation going not to mention actually staying fit.

Since moving away from the delightful three-a-day meals at Sterling College I’ve been very conscious about what meals look like. I’ve made a point of making each of the two meals I eat at work each day from scratch. That looks like a lot of oatmeal with whole milk and flax seeds in the morning and leftovers from the night before for lunch. I rarely eat out as it is and the drive to keep eating whole, simple, healthy foods has kept me at home and in the kitchen even more often. I love craving warm naan and a hot bowl of curry and then finding a recipe and making it myself instead of getting some down the street. I make exceptions for good hash browns and croissants though. Something I’m going to try to make is granola, especially after seeing this picture and reading the recipe: 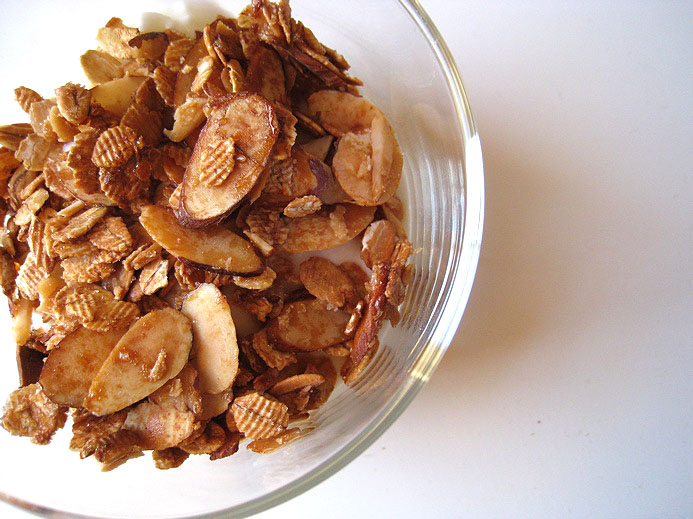 Click the photo to read the recipe and get inspired too!

On another note, I’m working on cutting all canned foods out of my diet. Grist published an interesting article about and I already make four out of five of the foods on their list from scratch, but I do buy plenty of canned black beans. I never wanted to plan on using beans far enough ahead of time to start soaking them but after realizing that the cans are lined with BPA plastics I just can’t get another can. So, I realized that all I needed to do was change the way I think of dried beans. Instead of a process that I start ten hours before I want to use them in a recipe, I just cooked a large batch over the weekend and stored the cooked beans in the fridge until I want them throughout the week. It’s the same way I think about granola, yogurt and crackers… all foods that I cook in batches and eat over a long period. The only thing I haven’t been able to work around is canned tomatoes.

Yogurt, sauerkraut, kombucha, ginger ale and sourdough are all on my expanding list of foods that I want to have fermenting around the apartment. I have my Wild Fermentation book and a new ceramic crock ready to go for the sauerkraut and ginger ale. I recently got myÂ  hands on a loaner scale so I can make the sourdough recipe from Tartine again, but this time I’ll have a bit more precision and perhaps more success (all of the recipes are weight based instead of ye olde imprecise cups, teaspoons, tablespoons of most recipes). I’ll be sad when the scale is gone but I’m definitely planning to invest in one of my own ASAP.

Pickles, dilly-beans, maraschino cherries are another beast that I’m getting ready to grapple when their various ingredients come into season.

Most things have been on pause for a long time. I want to go in and dust off my Etsy shop now that I’m back in Portland and feeling inspired. I’m getting tired of seeing things in boutiques and sassing myself with “I could totally make that” snark snark, and then not actually making whatever I was eyeballin’. I’ve joined the whole Pinterest rush and started hoarding even more ideas and lovely photos and now it’s time to get cracking. For example, I’ve been wanting to make some pillows… I’ve got the perfect stitch for the front from Karen Barbe’s blog and even have the inserts just lying around the apartment.

Where are the pillows now, you might ask? Still in my brain, waiting for me to sit down and actually work on them.

Oh, and the bunnies are vowing to nap more, cuddle better and stay cute. I discovered this old photo of Sir Linus hiding in my e-mail. It’s a cold, foggy day… perfect for a little furry pick-me-up.