Look at all them bunnies!

Welcome to the new embroidery patterns in the etsy shop! I went to the Holiday Market at the Craftsbury Academy yesterday to sell some goods. I did a booth with Sarah who goes to Sterling and knits these great lace shawls and also . It went pretty well, we both sold some things and this was a good way to start dipping our toes into the local craft scene. We both signed up to do the Winter Market which starts December 12 and happens once a month all the way through April. Here’s our booth, my things are on the right and Sarah’s are on the left. It was a little slap-dash, we got together the night before and attempted to try to set things up, but that turned out to be utter chaos so we had to do most of it during the two hours before the show started. It worked out fairly well in the end, but I think we could have sold more if we’d displayed something better. Ah well, next time! There are some familiar faces here, no?

Wallets are something new I’ve been working on. I really like how they feel and how easy they are to make. I even have a pattern up on etsy if you’re interested… although the pictures aren’t terribly interesting. I’ll have to work on that part. And some woolie mans! Turns out they sit really well in the beer holders that I fished out of the recycling. I wish I’d had some time to cover them up, but maybe that’s part of their charm, no?

The Uries gave me an application for a Holiday Craft Market at the local school in Craftsbury. It was due on the 1st but I called the woman on the form and found out that there’s still enough room! I’m going to a craft sale! To sell things! Oh I’m so excited….

It’s on the Saturday after Thanksgiving, oh I can’t wait.

Cragslist has a “Best Of” section where you can find all sorts of amazing stories and ads (warning, mostly NSFW). For instance:

I have a family of taxidemied hamsters for sale. They are perfect for the kid who wants a hamster but you know damn well won’t take care of them. Just buy a cage, pose them in it and tell the kids to enjoy. If the kids ask why they aren’t moving just explain to them that happy hamsters keep still. These hamsters were originally bought with love and taken care of very well. Then, as is usually the case with my little ba**** kid, he lost interest and kept forgetting to feed them. One by one they dropped off. I couldn’t bear to flush these cute things down the toilet so I bought a taxidermy kit and stuffed them. The best part about these guys is that they won’t soil the cage or cost anything in food! They’ll just give hours of pleasure like live hamsters. Call or e-mail me with an offer so that you can begin your new life as a hamster owner! [number deleted]

Heehee! Yesterday was May’s Crafty Wonderland in the basement of the Doug Fir Lounge on Burnside. I decided to ferret out all of the goodies crammed into the nooks and crannies of my room, stuff them in a bag and head out to set up shop. I was really nervous… I mean, what if people didn’t like my things? I know that I like them, but that’s because I’m the one making them… of course I like them. I’m even madly in love with a few.

All that worrying was for nothing. I had a great day meeting the other crafters and shoppers and I’m really excited about going again next month. I wanted to give a HUGE thank you to everyone who came out to support us (whether you bought something or not, just going can make a big difference) and a double thank you to everyone who bought something yesterday. It’s you guys who make all of this possible and enjoyable. At the end of the day I even did some trading with the other crafters… I got to pick out one of Cate’s wonderful original illustrations in trade for a lion and moo cow and I traded Ciao Birdie an embroidery piece for one of her bird collages on wood. It was a really, really great day! I feel like this is probably what my brain looks like. A little lion over here, some felted rocks over there, and me sitting right in the middle of the nesty-mess-chaos, looking out at everything. It’s a good brain to have, let me tell you! 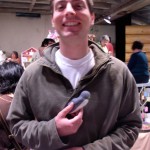 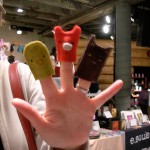 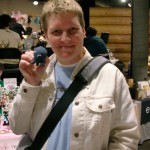 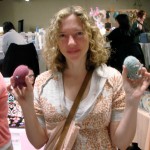 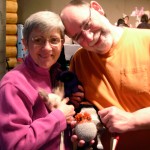 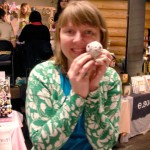 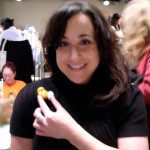 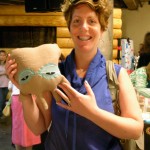 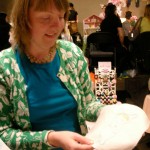 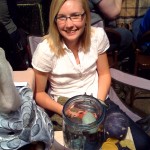 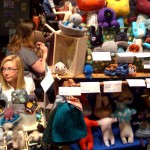 Thank you again to all of you who came with empty bags and left with them chock full of goodies!

The lady from My Folk Lover (the blog) also has an etsy store. She’s having a 50% off sale on all of her prints for the next 24 hours and I totally just bought one. I’m really happy that I can get so much happiness from reading her blog and now I can turn around and give back to her. Plus I really like this print. Doesn’t mean you can pull out the crazy card in the name of “fashion”. Yes, I know it’s knitting and knitting is a totally un-hip thing to do unless you’re old and in front of some picturesque fireplace in a book like Little Women… then it’s ok. But when I hear that you’re have a sale (1.99 on all your patterns) I’m going to get excited even though I’m really not your biggest fan. I find some cute things, but then you throw in a wild card like this doozy:

What is that? Just because you’re Vogue and everything that goes along with it does NOT mean that it’s ok to put a giant, fugly handprint in the middle of a dude’s chest. It’s already a struggle to make knitting look sexy and it’s not going to help if it looks like Manos, Hands of Fate has designed this year’s knitting patterns. Yes, you do have some sweet things to balance this (matching his and hers bulky 90’s sweaters were never cool) and that monstrosity out.

It still doesn’t explain this “phase” you’re going through, I don’t think I like your idea of “whimsy”. Still, things are down to the $1.99 range and that’s pretty reasonable. But only until Thursday when everything goes back to the still reasonable $5 range. Wow, such savings…